From Kelabit Wiki
Jump to navigation Jump to search 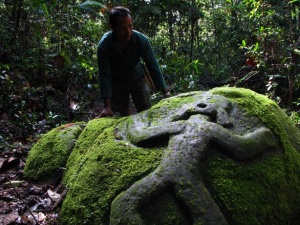 The erection of batuh narit (megaliths) is one aspect of the Kelabit culture that was conspicuous and unique from other tribes in Sarawak. Their plateau was studded with artfully arranged standing stones, huge boulders carved with cryptic symbols, and ceremonial trenches dug across river valleys in commemoration of their ancestors. The Kelabits’ was a culture without writing but, like the tattoos across their bodies, each of these transformations of the landscape told a story. Through them the living kept company with the dead, as they went about their daily life through a land etched with their memories. (1)

This was a practice that dated back to time immemorial, but it would only survive Harrisson’s visit by a couple of years. His mission brought the Kelabits into close contact with their previously distant neighbours, with whom they co-operated in disrupting Japanese troop and supply lines. It also introduced them to modernity, represented by shoes, parachute cloth and – their particular favourite – sub-machine guns. With the Japanese surrender and the end of the war, the rest of the modern world arrived in the form of traders and missionaries, and the Kelabits’ traditional animist beliefs were rapidly supplanted by Anglican Christianity.(1)